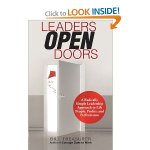 I love leadership.  Everything about it, when it’s done right.  I love being able to help others grow, find their niche in doing whatever they’re hard-wired to do.  And because I love leadership so much, I really enjoy reading books about leadership… especially new books.  I was recently introduced to a book that I’m finding both refreshing and extremely helpful.  That book is Leaders Open Doors, authored by Bill Treasurer.  And today, we have the pleasure of having Bill as a guest blogger!  Very excited about that… I hope you’ll leave comments, and I especially hope you purchase the book!  It’s definitely a must-read, whether you’re a seasoned leader or just getting your start in leading others… this book is an awesome resource.

Oh… before I forget, I’m giving away free copies to the FIRST 3 PEOPLE who leave a comment!  Just make sure you include your email address, and I’ll send you an Apple access code to download your free digital copy from iTunes!

But enough from me… here’s Bill:

“Whatever you do, don’t even think about going near that rock.”

These words, a final bit of coaching advice, were said to me just as I got ready to paddle over Nanny Falls, the culminating rapid on the Nantahala River. It takes a few excursions before a beginner kayaker can graduate to Nanny Falls, and I had managed to flounder my way down a few other rivers. But this experience was bigger and splashier. It was also more dangerous, as Gabe, the most experience kayaker paddling with our group, incessantly let us know.

Funny how one’s nerves can distort one’s thinking. Gabe’s words reverberated in my head as if he were banging them on a steel drum. The rock that Gabe was warning me against was a house-sized slab of granite with the bottom edge hung over the river, creating what’s known as an “undercut” – a dangerous hole that can trap a kayaker, recirculating them over and over under the water. Getting pinned in an undercut is one of the most common causes of kayaker death.

As I paddled toward Nanny Falls, all I could think about was what Gabe told me not to think about…that rock. That damned forsaken rock. That gigantic fossilized piece of kayaker-ingesting…

“Holy crap!” I thought to myself, “I’m trapped under that boulderous bastard!” And I was! By over-warning me about the rock, Gabe had helped me narrow my thinking until all I could think about was the stupid rock. Instead of focusing on what I needed to do, I was focusing on what I needed not to do. That anti-goal thinking had helped me get pinned under a granite behemoth.

Somehow I managed to dislodge myself from my boat, grip the bottom edge of the rock with one hand, and pull myself out of the liquid vortex. I had escaped, but narrowly.

When faced with, or witnessing, other situations that required healthy doses of courage, I’ve often thought back to this early kayaking experience. I’ve come to believe that when it comes to the advice of coaches and friends, it is more common for people to tell you what not to do, than what to do. Their motives are in the right place, but their approach isn’t. In order to keep you safe, they over-warn you about the dangers. In small measure, this makes sense, but when heightening your awareness of the dangers becomes the overriding focus of their advice, it becomes the equivalent of telling you, “Whatever you do, do not think about the color blue!”

When it comes to putting courage inside of others, the literal definition of encouragement, a better approach, is to spend more time on specifying what a person should do, not what they should avoid. Driving a car works much better when you’re watching where you’re going than looking at all the things you should avoid.

When pursuing personal and career goals the important question is: What are you looking at? Are you focusing on where you want to go? Or are you leering at all those things that could trip you up? Your courage will help you go in whichever direction you are most mentally committed to – your goal or your dangers.

Bill Treasurer is the Chief Encouragement Officer of Giant Leap Consulting. His latest book is Leaders Open Doors (www.leadersopendoors.com), and focuses on how leaders create growth through opportunity. Bill is also the author of Courage Goes to Work, an international bestselling book that introduces the concept of courage-building. He is also the author of Courageous Leadership: A Program for Using Courage to Transform the Workplace, an off-the-shelf training toolkit that organizations use to build workplace courage. Bill has led courage-building workshops for, among others, NASA, Accenture, CNN, PNC Bank, SPANX, Hugo Boss, Saks Fifth Avenue, and the US Department of Veterans Affairs. Contact Bill at btreasurer@giantleapconsulting.com, or on Twitter at @btreasurer (#leadsimple).

11 thoughts on “What Are YOU Looking At? [Guest Post from Bill Treasurer]”